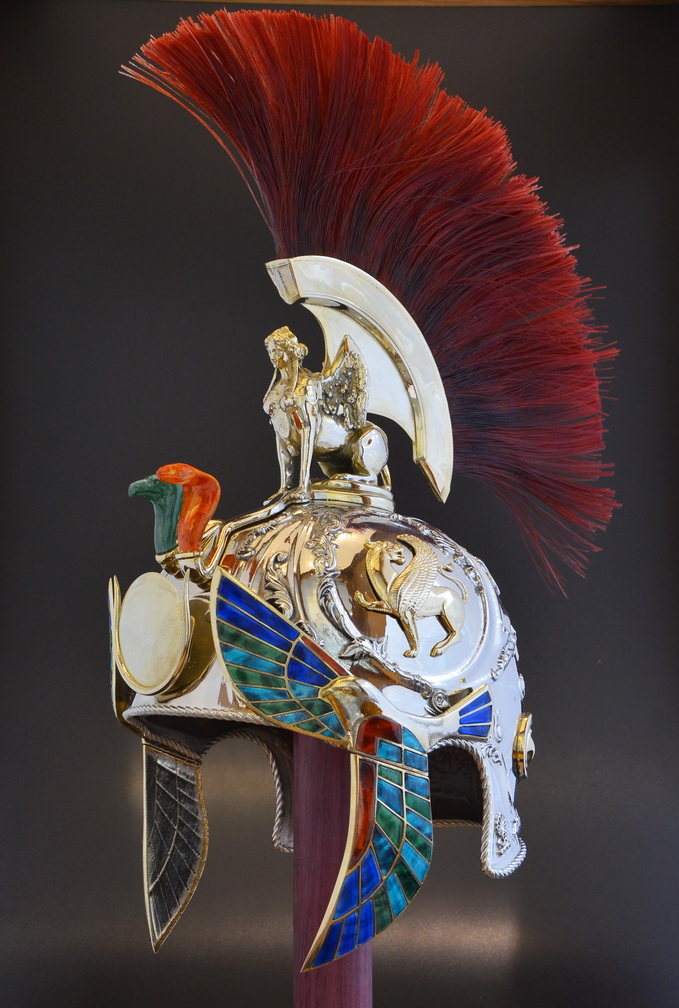 They call it “Mark Antony’s Galea,” the legendary helmet created by Cleopatra’s Egyptian craftsmen and smiths for her Roman consort, Mark Antony. Featuring Egyptian iconography, this extraordinary helmet is beyond gorgeous. And, if you can believe it, was created completely by a 3D printer! 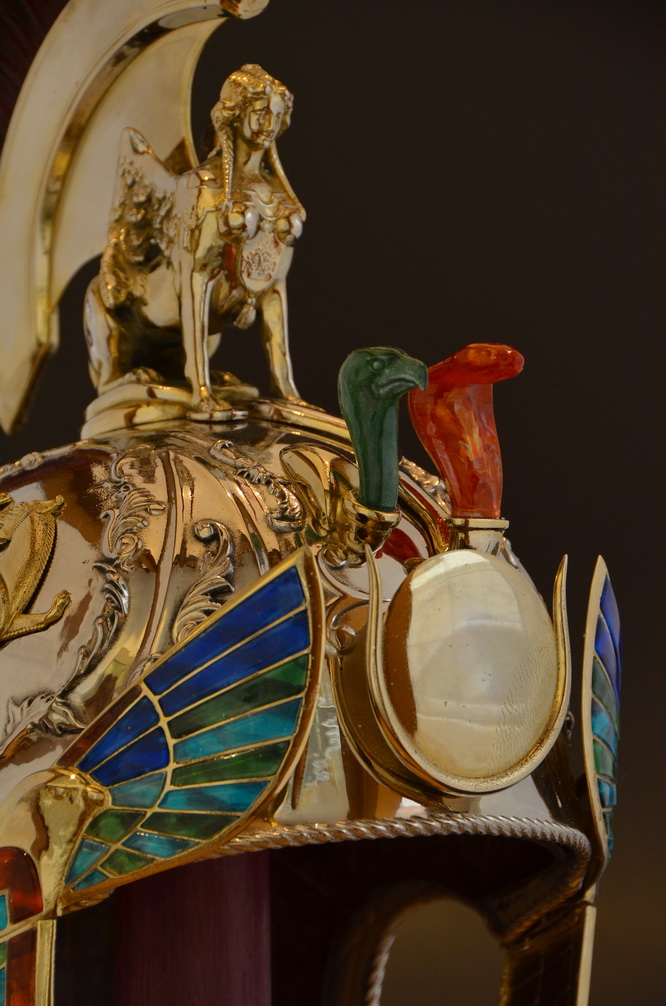 Metal 3D printing! And how amazing and gorgeous is the result? Nobody has created anything like this before or since. I learned about it when the company contacted me asking me to help them write a legend to go with the helmet. As you can imagine, I was all over it!

The Legend of Antony’s Egypto-Roman Galea

It began with a vision. In 34 BCE, the queen of Egypt beseeched Isis to protect her consort, the Roman general, Mark Antony, in battle. Swathed in golden robes and wearing the blue crown of war, Cleopatra VII led a massive bull to the goddess’s altar for sacrifice.

When the priest slit the beast’s throat, the gods granted Cleopatra a vision: within the blood she saw Antony fighting with the fury of Hercules. As he cut down a Parthian warrior, another sword—curved and foreign—came into view, arcing toward the general’s exposed neck. 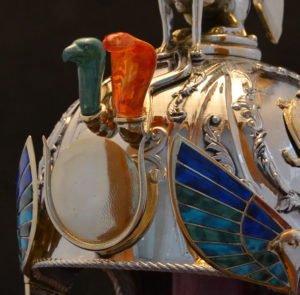 “No,” the queen cried and the vision froze. “Save him, save Egypt,” Cleopatra pleaded.

“To save one is to save the other,” echoed the mysterious voice of the goddess. “Will you expose your own neck to save both?”

“I will,” the queen promised.

In that moment, the vision changed. Horus, in his falcon form, spread his wings over the sides of the general’s helmet, blocking the deathblow. A flash of light, as piercing as staring directly into the sun, blinded the enemy. Many would later swear they heard the roar of a lion, the hissing of snakes and the sound of a great hoofed beast tramping through the fields of war.

When the vision evaporated and the sacrificial bull breathed its last, Cleopatra knew two things: Antony would emerge victorious in Parthia, and she would honor the gods by creating a new helmet for him. The goddess had made clear that Egypt’s fate was inextricably tied to Antony’s life. 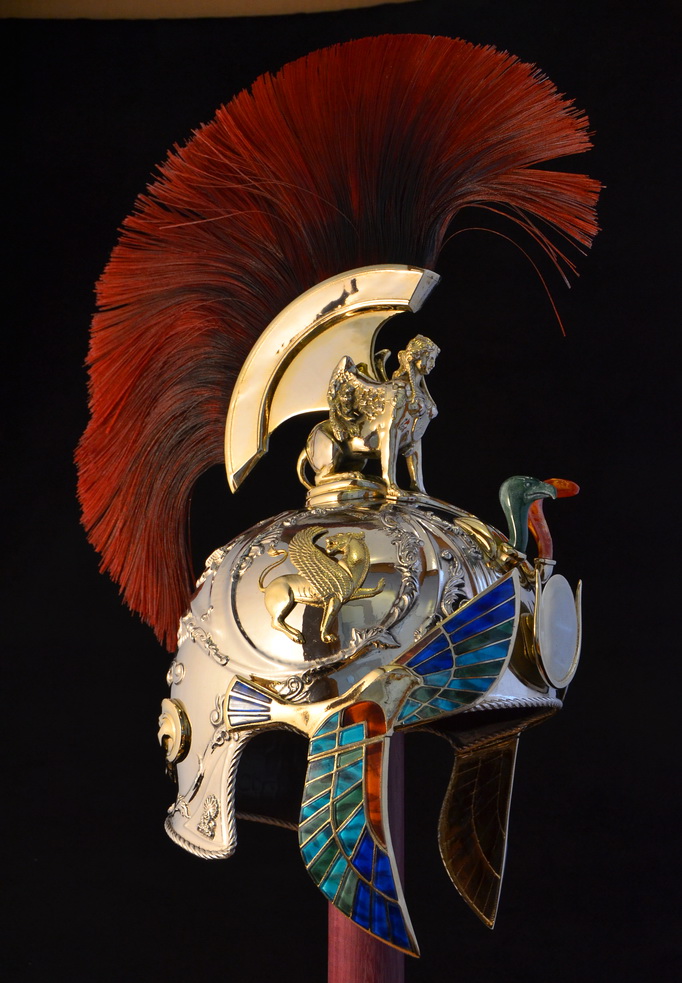 The queen put Egypt’s best metalworkers and jewelers to the task. Her artisans forged the base out of polished steel then covered it in gold. They hung Horus’s falcon wings—shining with lapis lazuli, garnet, and turquoise—over each cheek plate, just as he’d appeared in Cleopatra’s vision. Isis’s own symbol—the sun disk cradled in Hathor’s horns—covered the brow. Amun in the form of a great horned ram protected the back. Winged lions adorned the sides and a mighty sphinx, bearing the queen’s own face, balanced before the Roman horsehair crest of brilliant red.

Finally, Egypt’s symbols of royalty—a malachite vulture and a carnelian cobra—reared majestically over the shining sun disc. The artisans even cushioned the helmet’s insides with Nile crocodile skin.

When Antony returned to Alexandria, the queen presented him with the magnificent helmet before his victory parade through the city. It was said that later Antony admitted to feeling a strange power lift him up as he slid the ornate helmet over his head.

At the sight of the Roman general protected by Egypt’s most powerful gods, Egyptians roared in approval. The helmet became the symbol of a future where Egypt and Rome—the east and the west—united to create a more stable empire.

At the end of the parade, Antony bestowed Cyprus, Libya and Syria to the queen. To his three children with Cleopatra—two sons and one daughter—he gave territories in Armenia, Media, Phoenicia, and Syria.

The Egyptians were overjoyed with the expansion of Egypt’s territories. But the Romans were horrified.

Antony’s rival, Octavian, decried the general’s “betrayal” of Roman ways: How dare he hold a Roman Triumph on foreign land? How dare he give Roman lands to a foreign queen and their illegitimate brood? How dare he wear an Egyptian helmet elevating the queen’s image above the Roman symbol of war? Surely, that was proof she had unmanned him! 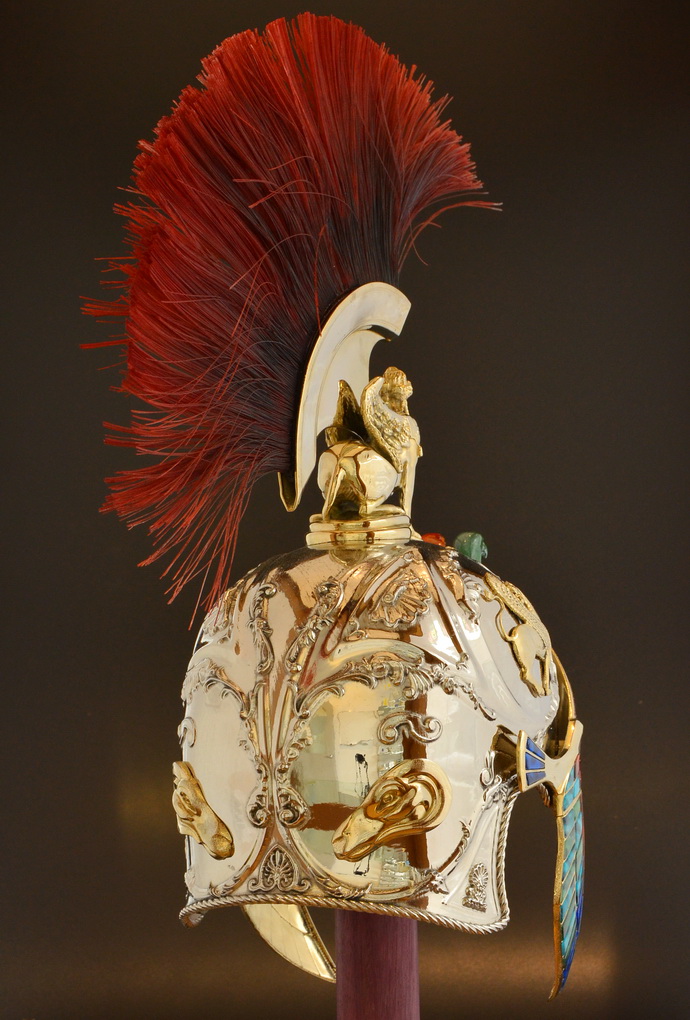 As word spread of his so-called disloyalty, Antony put aside the helmet. Soon after, Octavian declared war on Cleopatra.

Three years after the creation of the helmet, Antony and Cleopatra’s navy faced off with Octavian at Actium in Greece. But Octavian’s continuing campaign against Antony for “choosing the Egyptian queen over Roman duty” took its toll. Many of the general’s allies and officers turned against him.

On the day of the battle, Cleopatra urged Antony to wear the helmet. He refused. He’d heard the whispers of his own men questioning his loyalties.

According to legend, that was the moment the Egyptian gods abandoned Antony.

During the battle of Actium, the queen spotted Octavian’s general—Agrippa—encircling their navy. Unable to alert Antony in the chaos, she gave the order to hoist the sails and made for the opening before the trap closed. Antony quickly followed.

Octavian claimed that the queen had abandoned Antony and that he had, in turn, deserted “those who were fighting and dying in his cause.” The propaganda worked. His captured navy and all of his land legions defected to Octavian. 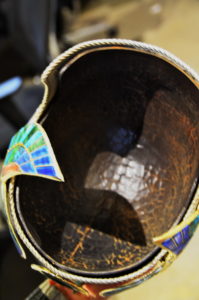 Antony had nothing left but his remaining small force in Alexandria. And the queen.

In 30 BCE, as Octavian’s army stormed Alexandria, Cleopatra at last convinced Antony to wear the helmet forged from her vision. But it was too little, too late. When he gave the order to attack, his warriors refused. To a man, they defected to Octavian.

In a fury, Antony retreated to the palace, bellowing with rage at the betrayal of his most loyal men. Later, Octavian would claim that it had been the queen who had betrayed him, so that Antony’s Roman deserters could save face.

But the queen had not abandoned him, even when, weeks before, Octavian secretly sent her a promise to reinstate her if she handed Antony over to him.

She never did, of course.

But the final insult and loss was too much for Antony. He fell on his sword. As he lay dying, he begged to be taken to Cleopatra. Still gripping the now blood-soaked helmet she had made for him four years earlier, he died in her arms.

Cleopatra hid the helmet from her captors, convinced that Octavian would desecrate it, steal its precious jewels and melt the gold down for his own use.

After weeks of house arrest, Cleopatra begged to visit Antony’s tomb. She smuggled the helmet to the Priests of Anubis and instructed them to bury it with his body.

Then, with her two ladies, Cleopatra returned to her mausoleum where she awaited a delivery of figs. Inside the fruit basket slithered a deadly asp, the symbol of Egyptian royalty and eternal life.

She sent a final message to her conqueror: bury me with Antony. And, in keeping with her promise to the goddess, Cleopatra exposed her neck to the venomous cobra.

The location of the double tomb of Cleopatra and Antony has been lost to the fog of history. The legend of Antony’s helmet, however, never died.

For more than two thousands years, it was whispered that if found and worn by one deemed worthy, the old Egyptian gods would imbue the helmet’s wearer with the power to unite the east and west in peaceful cooperation as Cleopatra and Antony had once envisioned. Until then, strife and distrust would continue to reign.

The recreation of this magnificent helmet is perhaps the first sign that the tomb of the last queen of Egypt and her Roman consort will soon be discovered. And the helmet’s legendary power finally resurrected.

Because if these amazingly talented craftsmen can create something this beautiful as a creative exercise, imagine what they can do for you!

When I was a kid, I wanted to be an archaeologist. By the time I entered college, I had forgotten my dreams of digging in the dirt and ended up with a degree … END_OF_DOCUMENT_TOKEN_TO_BE_REPLACED