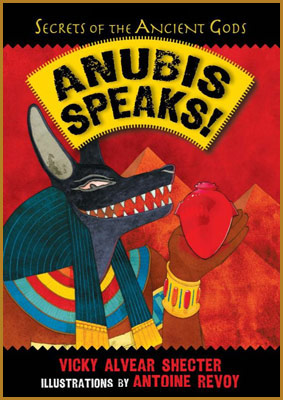 About the book: Anubis, the god of mummification, takes the reader on a boat journey through the mythological ancient Egyptian dark lands—the twelve hours of darkness—where Ra battles against the forces of chaos to be reborn again at sunrise. Like a good tour guide, Anubis shares fascinating facts and stories about ancient Egypt throughout the trip.

School Library Journal says Anubis’s narration is “wickedly funny” and that the book is “stuffed with an “incredible wealth of interesting detail. Kirkus says it is an “informative and unusually lively look at the Egyptian way of death.”

Allow me to introduce myself. I am Anubis—the Egyptian god of the “Mysteries of Embalming,” the “Guardian of the Veil of Death,” “Opener of the Ways of the Dead,” and if you are “bad” . . . Your. Worst. Nightmare.

But do not fear. I will not snatch your beating heart from your chest and toss it to my good friend, crocodile-headed Amut the Destroyer for a squishy snack . . . not today anyway. Instead, I will guide you through my world of deep magic, strange gods, and gruesome monsters. I will show you how my people, the ancient Egyptians, prepared the dead for eternal life, and how we gods fought the forces of darkness and evil—every night—to keep you safe.

Oh dear, were you perhaps hoping for a less scary- looking guide to lead you through the Egyptian dark lands; one without so many razor-sharp fangs? Too bad. You’re in my realm now. And I’m in charge. So pay attention.

We will, soon enough, come face-to-face with the evil one—Apophis, the snake of doom that threatens to devour and destroy the world. In my day, only our dead pharaohs—kings who turned into immortal gods upon their deaths—were strong enough to join the rest of us gods in facing the beast.

You, my little human, are no pharaoh, but I’m allowing you to come along anyway. You may thank me later, preferably in buckets of blood. Meanwhile, take heed; if you scare easily, I suggest you close this book right now and go back to coloring rainbows and unicorns.

There will be blood. And snakes. And decapitations. And monsters who like to gobble up hearts and squeeze heads until they pop.

Still with us? Good. Then, please, step into my lair…

My dad, Osiris, was an important guy, if I do say so myself. My people believed that he was Egypt’s first pharaoh. He brought farming to the land and showed humans how to live like people and not animals. He achieved many great things, me being one of them, of course.

Osiris ruled happily in Egypt while I was in charge of the underworld. All of it. Then the jealous god Set murdered his own brother Osiris. After lots of drama—including the cutting up and hiding of Osiris’s body parts—his wife, Isis, came to me for help in re- assembling Osiris’s body, which I did through the magic of mummification. Then we brought the old man back to life. The catch was he could only live in the land of the dead. (Hey, you can’t have everything, am I right?)

Still, let the record show that I, Anubis, revived and resurrected my own father. And how did dear old dad thank me for resurrecting him? He demoted me. Yeah, Dad took my job. He became the top god of the dead, pushing me down to number two—as mere god of judgment and embalming.

Now, I ask you, is that fair? I mean without me, he’d still be in pieces! But I’m not bitter. Really, I’m not.

Anyway, thanks to my magnificent mummification and resurrecting abilities, Osiris became the model mummy, the symbol of what everyone hoped for themselves in the afterlife— to be preserved in their earthly form and live forever. So despite the fact that he took my job, most of the prayers for the dead are aimed at me, because I’m the guy who made it all happen.

I Want My Mummy!

With Osiris as their example, my people believed you needed your body to join the party that never ended: no body, no afterlife. Of course, in a pinch, your statue might do, but for the most part, people preferred a future in their own skins . . . literally.

So how did it all begin? When the earliest Egyptians buried their dead in the desert, the intense heat dried out the corpses, mummifying them in a crude way. My people noticed the dried-out bodies and figured that’s what we gods wanted for them. Some bodies, though, were ripped apart by wild animals before they dried out. Nobody wanted that. So they put the dead bodies in coffins to protect them from wildlife. But without direct contact with the desert sand to bake them dry, the bodies melted into goo. That’s when people began experimenting with different preservation techniques. Eventually, they found the best process for preserving the dead, which I will explain below….

When I was a kid, I wanted to be an archaeologist. By the time I entered college, I had forgotten my dreams of digging in the dirt and ended up with a degree … END_OF_DOCUMENT_TOKEN_TO_BE_REPLACED

We use cookies to ensure that we give you the best experience on our website. If you continue to use this site we will assume that you are happy with it.OkPrivacy policy