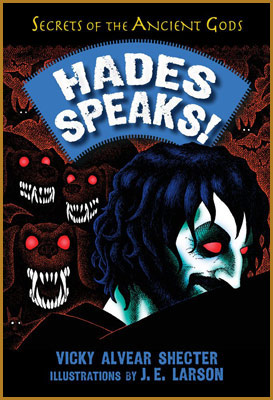 Hades, god of the dead, welcomes readers on a dangerous tour of his underworld kingdom, filled with monsters, furies, giants, and vampire demons. Along the way, he reveals ancient death rites and sinister curses, tells hair-raising stories, and cracks jokes to die for. With his witty voice and ghoulish sense of humor, Hades is the perfect guide through this fresh and imaginative work of nonfiction that reads like a novel.

Includes a glossary, bibliography, and index.

“This book is written like I like them – good story with an edge of humor!”
This Kid Reviews Books.com

“A tour of the ancient Greek (and Roman) underworld, squired by Hades and his lovely wife, Persephone…[Hades] is a chatty chaperone [who] delivers background on the origins of his mythological clan…and his fiendish staff.”
Kirkus Reviews

When I was a kid, I wanted to be an archaeologist. By the time I entered college, I had forgotten my dreams of digging in the dirt and ended up with a degree … END_OF_DOCUMENT_TOKEN_TO_BE_REPLACED